Ijesa history has a varied accounts based on myth and historical accounts. According to the first account by Samuel Johnson the Ijesa people used to reside in Ile Ife prior to the reign of Sango. It is said that Ijesa people were “slaves were purchased and located in the district of Ibokun ; there they were tended as cattle, under the care of Owaju, and from them selections were made from time to time for sacrificial purposes; hence the term Ijesa from Ije Orisa (the food of the gods).” Johnson (1921) posited further that “they never offered any resistance to this system, hence the saying “Ijesa Omo Owaju ti ife opo iyk ” (Ijesas children of Owaju, subject to much sufferings).
I personally believe this particular history accounts for large number of Ijesa enslaved people of Ilesa getting shipped to slavery in South America especially Brazil, and the Caribbeans.

Johnson (1921)  recounted that “There is also a legend that when the nations began to disperse from Ile Ife and members of the Royal Family were appointed kings and rulers in diverse places, a young and brave scion of the house was appointed the first Owa or king over the Ijesas, but that he returned to the alafin and complained that his territory was too small, and his subjects few, the sire thereupon ordered a large bundle of sticks to be brought to him, and these sticks he converted into human beings for the Owa, in order to increase the number of his subjects. Hence to this day the Ijesas are often termed by their neighbours ” Qmo igi ” (offspring of sticks !)”

Current historical account based on Ijesa peoples own tradition, which does not contradict Samuel Johnson`s account assert that their direct ancestor was Owa Ajibogun or Owa (“King”) who was one of the 16 sons of the deity Oduduwa. It is said that their present city of Ilesa (Ilesha) in Osun State was “founded in c.1350 by Owaluse, a grandson of Ajibogun Ajaka (Ubiquitous Warrior) Owa Obokun Onida Arara, the most accomplished son of Oduduwa, the progenitor of the Yoruba race of South-Western Nigeria and Benin Republic.”  Ijesha, as a historic town is one of the oldest settlements in Yorubaland. Other tradition among the Ijesa themselves also traces the origin of the Ijesas state to a younger son of Oduduwa called Obokun (Owa’s ancestor), in commemoration of an occasion on which he fetched sea water to cure his father’s blindness. Obokun then settled in what was to become Ijesaland. He found, like other founding heroes, pre-existing political structures including a confederacy of five towns in the Obokun area. Obokun himself is so central to the Ijesas that they call themselves Omo Obokun (Children of Obokun)
Whatever be the case it can be clearly seen that the ancestors of Ijesa people migrated from Ile ife to their present location in Osun State. Ilesha traditions hold that the site of Ilesha was already occupied by scattered settlements of an aboriginal population, the most important being identified with today’s Okesa, the long street running west-east along Ilesha’s spine, whose leader is regarded as the ancestor of Ogedengbe, The Obanla of Ijeshaland.

Ilesha became an important and major Yoruba military centre in the campaigns against Ibadan, 60 miles (97 km) west-Southwest in the 19th-century Yoruba civil wars. A leading member of a confederacy known as the Ekitiparapo meaning ‘Ekiti together’. This combined forces of the Ijesa and Ekiti was formed to fight for the independence of their people.
In 1817 a long series of civil wars began in the Oyo Empire in which hundreds of people died; they lasted until 1893 (when Britain intervened), by which time the empire had disintegrated completely.

Modern Ilesha is a major collecting point for the export of cocoa and a traditional cultural centre for the Ilesha (Ijesha) branch of the Yoruba people. Palm oil and kernels, yams, cassava, corn (maize), pumpkins, cotton, and kola nuts are collected for the local market. Local industries manufacture nails and carpets, and the town has a brewery; there are also a recording company and a publishing firm, and the Supreme Oil industry at Ilesha. Several prominent quartzite ridges lie east of Ilesha, and gold mining is an important activity in the area, i.e The Iperindo Gold field.

Ilesha is a classic – though hardly a typical – example of that ethnographic celebrity, the Yoruba town: a large, nucleated settlement that is the centre of a kingdom and itself the primary residence of an overwhelmingly agricultural population. Even when it was largely derelict owing to war, in 1886, Ilesha’s population was estimated to be between 20,000 and 25,000 and a figure of up to 40,000 may be appropriate for the height of its growth before the sack in 1870. Though this is not as large as the largest Oyo-Yoruba towns of the nineteenth century, its considerable size was not due,as theirs was, to very heavy recent immigration under the impact of the wars.
It was the recognition of the need for the Ijesa to lift up themselves by their own bootstraps that led to the establishment of the Ijesa Improvement Society, the first modern pan-Ijesa socio-cultural group, in 1922. It was at a time when the Ijesa not only had problems with their British colonial overlords but also with their own local administration under the Owa Obokun who had since 1914 been constituted into a Sole Native Authority on the model of the Northern Nigeria Emirates, under the Indirect Rule of System introduced by Sir Fredrick Lugard. This meant that the Ijesa had to contend not only with a hostile foreign colonial power but with a despotic local administration supported by that foreign colonial power. In this kind of unpleasant political climate, the best help was self help. 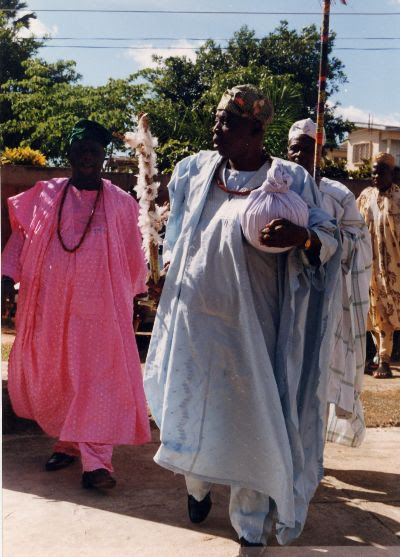 Yoruba chieftains in their traditional dress

The principle of self help, which was elevated to a philosophy of action by the aggressively individualistic Ijesa in the inter-war years, was to assist the socio-economic development of Ijesaland and to make the Ijesa very cautious towards, if not totally suspicious of all governments be it local, regional or national in the post war and pre-independence era. This explains why the few commercial and industrial establishments in Ijesaland today are owned largely by the Ijesa themselves. Indeed, with the exception of the recent Federal Government efforts to exploit the gold deposits at Itagunmodi and Igun in Atakumosa Local Government area, there are virtually no government-sponsored commercial and industrial undertakings in the whole of Ijesaland.”

admin - January 8, 2019
0
The Ijesa are the traders and business icons amongst the Yoruba people; very good in commerce and have cut a niche for themselves as...